Deepin desktop edition works on notebooks and desktops, and aims at providing a stable, efficient and easy-to-use user experience. Its clean user interfaces and the convenient interactions reduces the browsing and searching time, allowing users to have more time to work and study. The new release – deepin 15.6, offers the delicated interfaces and easy-to-understand logics to help users start quickly. No matter which operating system was used before, you can get started easily.

The newly added welcome program demonstrates and guides deepin personalization. When boot after deepin installation, the welcome program will be automatically shown, playing video introduction and guiding you to set desktop mode and icon theme, which can be opened later by clicking “dde-introduction” icon in Launcher.

The navigation bar sticks on the left of Control Center. Click the module icon on the left to quickly skip to the settings you want, no need to scroll up and down any more. Moreover, display scaling function is integrated in Control Center for HiDPI screens.

Launcher in small window mode better fits the habits of dual systems users and new users, making the transition easier. The sequence of applications in “All Programs” list is the same as that of fullscreen mode, with the newly installed apps listed at the bottom, supporting dragging to reorder the list.

Comprehensive Deepin Manual, easy to find out the answers

The new Deepin Manual integrates the manuals of desktop environment and all deepin applications as an overall introduction; click its icon in Launcher to find manuals quickly and easily. 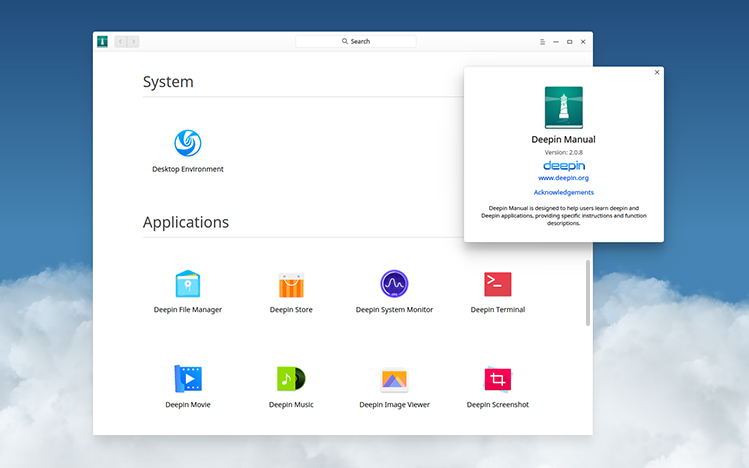 Light or dark theme, switch as you wish

The interfaces of deepin applications are more consistent, providing both light and dark theme to meet your style requirements.

Some of the new features are easy to get, while some are not and may be ignored. Even so, the detail fixing has never been stopped.

deepin 15.6 not only included new features, but also fixed the bugs and optimized some functions based on the feedbacks from community users.

In the development of deepin 15.6, besides adding new functions and improving the original functions, 217 bugs were fixed, excluding the bugs fixed after internal test. These bugs were fixed for desktop environment, deepin native applications, other applications, kernels, and Deepin File Manager, with 17 fatal bugs, 18 serious bugs, 152 normal bugs, and 30 enhancements.

There are still some problems in deepin. Some issues proposed by community users can not be reproduced once again, while some issues can not be reproduced by us. Although these bugs did not cause major problems, we still hope users know that so they can predict the problems that may occur, Besides that, more community enthusiasts are welcomed to help us improving. These issues include:

Prior to deepin official release, usually an internal test is implemented by a small number of community users, then we record their feedbacks and fix the bugs. In this release, we would like to thank the internal testing team, who submitted 15 suggestions and 52 bugs, covering Bluetooth, boot, shutdown, and Launcher. Among which, 11 suggestions have been confirmed for later fixing and 52 bugs have been completely fixed.

Thanks again to the members of internal testing team, including (in no particular order):

deepin 15.4.1 and above versions can be upgraded to the latest edition through “Control Center→Update”.
More details for system upgrade are here: (Debug FAQ).

deepin is an open source desktop system developed for common users. You are free to download, distribute, modify and use it.

Welcome to follow us on Weibo, Twitter and Facebook to acquire the latest update in the first time. You are also welcomed to join our forum to communicate and share your joy with us.

At last, solemnly thank community teams and companies who have provided support on testing, documentation, translation and mirroring. With your selfless contribution, open source world is getting better and better!

#2 How To Make CRUD Codeigniter [Without Bootstrap]
Scroll to top

This site uses cookies. By continuing to browse the site, you are agreeing to our use of cookies.